Apple’s latest Mac operating system is macOS 12 Monterey, the first major update to macOS since the big shift in macOS 11 Big Sur. Here’s everything you need to know about the new features.

macOS Monterey will launch without one of its most interesting new features, Universal Control. It’s still in beta mode, though Apple isn’t allowing users to test it yet. Apple’s macOS Monterey website says it will be available this spring.

Apple users often switch between devices, and with Universal Control, you can now use a single mouse and keyboard between your Mac and iPad. If you’re using a MacBook, its keyboard and trackpad can be used with the iPad. You can even drag and drop files between devices and perform gestures on the MacBook trackpad to navigate the iPad.

Additionally, Universal Control can do something that Apple’s Craig Federighi said would appeal to pros: You can connect three devices and navigate between them. During the keynote, Federighi used a 24-inch iMac, 13-inch M1 MacBook Pro, and an iPad, and was able to move the cursor between all three devices. He showed how you can take a file from the iPad, drag it through the MacBook Pro, and then drop it into a Final Cut Pro project.

Here are the Macs that are compatible with Universal Control:

Here are the iPads that are compatible:

Apple said during the keynote that Automator, the previous automation app, will continue to be supported and that Automator workflows can be imported to Shortcuts.

Safari on the Mac originally got a UI facelift to support its new tab-focused features. The tab bar takes on the color of the site you’re reading and the toolbar is more compact with the buttons that currently surround it—Home, Share, Privacy Report, Show Downloads—collected into a menu to the right of the address bar. However, after changing things early on, Safari in Monterey is now the same as before, though you can opt to use a new “Compact” version in Preferences that condenses everything down into a single bar.

The new Tab Groups allows you to save a set of tabs so you can access them later. Your Tab Groups are available on all the Macs that you use and are also updated across all of your Apple devices. And Safari keeps an eye on each tab and keeps sites from using up your system resources when you’re not actively using the tab.

Here are the devices that are compatible with AirPlay to Mac:

If you have an iPhone or iPad, you may be able to share content at a lower resolution to a non-supported Mac models when “Allow AirPlay for” is set to “Everyone” or “Anyone on the same network” in Sharing preferences.

FaceTime and Messages share new features that will also be available in iOS 15. These new features make it a lot easier to incorporate media into your conversations.

The new SharePlay support allows people to share an experience while watching video, listening to music, or even an app window while on a FaceTime call. The people on the call can control the media that’s playing, and the callers can even make a playlist. SharePlay works with Apple TV and Apple Music; support for other services will depend on those services adopting the SharePlay API and updating their services with support.

With Share with You, you now have more ways to handle the items that people send you in Messages. Apps such as Photos, Podcast, News, Safari, and TV will now have sections with the items people shared with you.

When you’re using FaceTime on your Mac, people using Windows or FaceTime can join in. When they receive the FaceTime link, they’ll have to use the latest version of the Google Chrome or Microsoft Edge browser, and they’ll also need H.264 video encoding support to send video from their device.

The new Focus feature allows you to set time periods that filter or block your notifications. For example, you can set up a Work focus that will filter your notifications and only deliver work-related ones. Apple will supply a set of Focus modes, and you also can create your own.

Like iPadOS 15, you’ll be able to create notes on the screen without having to launch the Notes app. You can add images to Quick Notes, and links in a note open up to that specific page in your browser. All your Quick Notes are collected in the Notes app and accessible on all of your devices.

The Notes app also has a new Activity view that lets you see revisions made by others in a shared note. The people in that shared notes can get notifications just by typing their name.

Another feature borrowed from the iPhone is Low Power Mode, which turns down the system clock speed and display brightness to preserve battery life on your MacBook.

Here are the Macs that can run macOS Monterey.

Monterey was released in the fall of 2021.

macOS Monterey: How to get the beta

Betas of the OS are available if you’re willing to take the risk. Apple suggests not using the beta on any mission-critical Mac—there’s always a possibility that a beta could make your Mac unusable, or it could have issues that interfere with your software.

Apple also has a public beta program that general users can sign up for at the Apple Software Beta Program website. 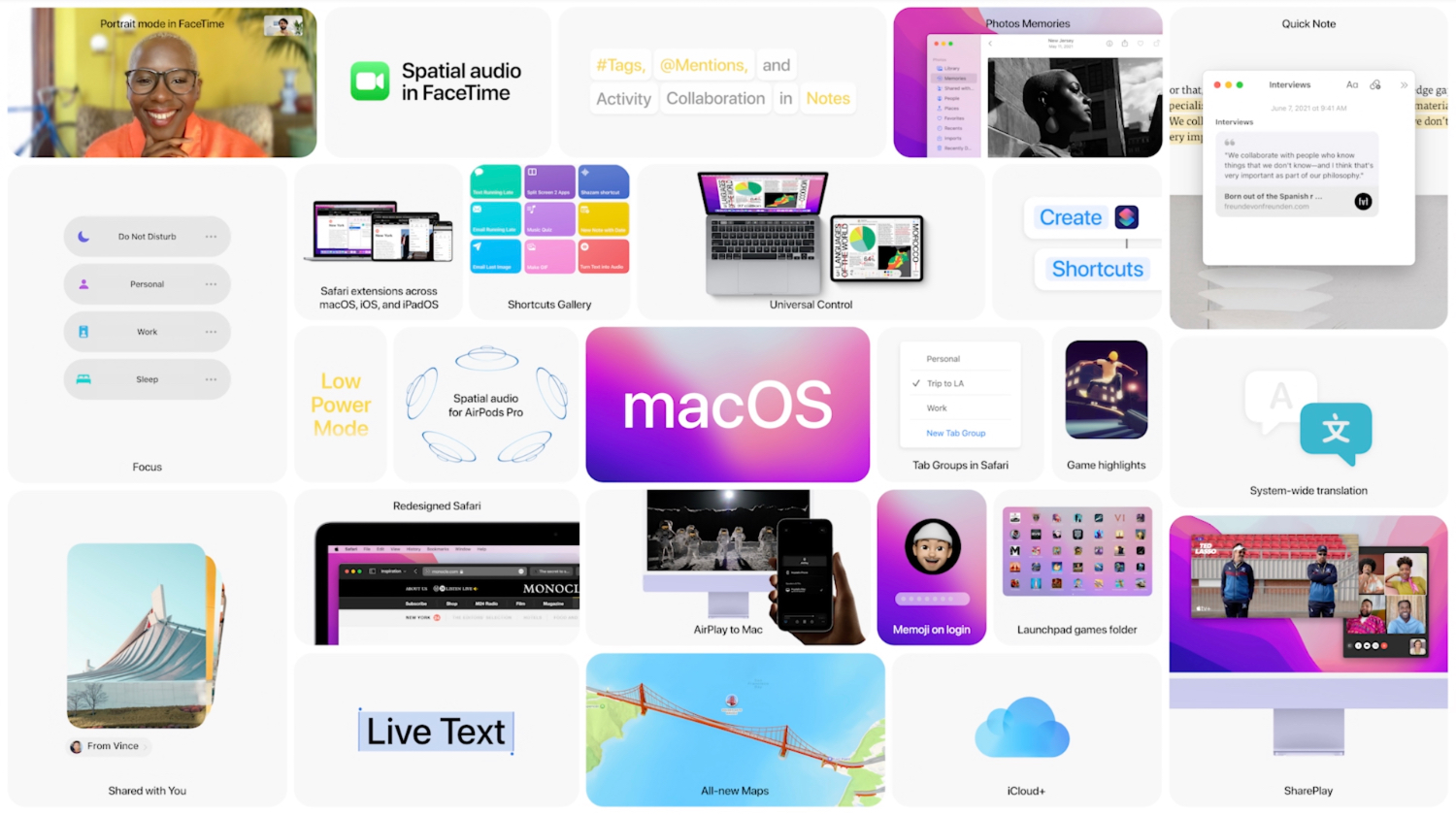