Alongside a new version of macOS, Apple introduced a redesigned MacBook Air with a new M2 processor. It doesn’t replace the existing M1 version, however—rather, it’s a new higher-end version of the $999 model. Here’s everything you need to know about the new machine.

Apple has confirmed that the new MacBook Air will start shipping in July. As yet we do not have a date for pre-orders to start.

Apple has said it will begin taking preorders for the M2 MacBook Pro on June 17 for delivery on June 14, but the on-sale date for the MAcBook Air is still unknown. Towards the end of July seems most likely.

Even with the promise of a July shipping date, however, it is possible that there could be delays and shortages due to various factors. If you don’t want to wait to buy a new M2 MacBook Air, check out the best deals on the M1 MacBook Air.

When the M2 MacBook Air goes on sale you will be able to buy one directly from Apple, or from one of the other resellers that will be listed below.

Apple has dramatically changed the look of the MacBook Air with the latest update. The tapered look that it was famed is gone, replaced with a more traditional flat design that’s similar to the MacBook Pro. However, while the tapered edge gave the illusion of thinness, the overall dimensions are thinner than before.

Otherwise, the new MacBook Air is similar to the old model, with a recessed well for the Magic Keyboard but doesn’t have a visible speaker grill along the sides. The bezels around the display are significantly thinner as well.

The 2022 MacBook Air features a larger 13.6-inch display, compared to a 13.3-inch display on the 2020 model. The new display uses Apple’s Liquid Retina technology, which means the corners are rounded rather than square. The 14 in-inch and 16-inch MacBook Pro models have higher-end Liquid Retina XDR displays.

At 500 nits of maximum brightness, the M2 MacBook Air is 25 percent brighter than the M1 MacBook Air’s 400 nits. This brings the Air in line with the 13-inch MacBook Pro, but places it far below the XDR display’s 1,000 nits. The MacBook Air also lacks the ProMotion technology of those models.

Apple introduced a screen notch for the camera with the MacBook Pro and the M2 MacBook Air follows this trend. The bezels around the screen are extremely thin compared to the older model (but not as thin as the 14-inch and 16-inch MacBook Pro) and the camera notch extends as far as the menu bar. As Apple explains, the notch actually gives you more usable space since the screen is taller. The area below the menu bar has the same 16:10 aspect ratio as before.

Apple has introduced new colors for a laptop for the first time in many years. However, while we expected the MacBook Air to launch in a variety of colors like the 24-inch iMac, Apple is only selling the new laptop in four options: silver and space grey like before, and starlight and midnight, similar to the new iPhone SE colors. Each model comes with a color-matched MagSafe cable.

The new MacBook Air will use an M2 chip, which brings the same 8-core CPU and two additional graphics cores compared to the M1. Apple also claims that the M2 doesn’t just offer faster performance, if does so while using much less power, thought it’s rated for the same 18 hours of battery life. The M2 chip also ups the RAM allotment with up to 24GB (versus 16GB on the M1) and 50 percent more memory bandwidth.

Just like the M1 MacBook Air, the M2 model lacks a fan. Without a means of cooling itself Apple has to stop the MacBook Air from getting too hot, which generally means slowing the processor down when the going gets tough. So the M2 MacBook Pro, which has a fan, will actually run a little faster for longer periods of time.

The notch at the top of the screen accommodates a much better webcam than that found in the 2020 MacBook Air. Apple has added its newer 1080p webcam as seen in the iMac and the 2021 MacBook Pro models so FaceTime calls should be much clearer.

Unfortunately, turning its back on the tapered ‘wedge’ shape in favor of a new flat shape didn’t mean that there was room for more ports, so you won’t be seeing card readers or HDMI on this model. LIke the 2020 MacBook Air, the 2022 model will offer two Thunderbolt/USB 4 ports, along with a 3.5mm headphone jack (which now supports high-impedance headphones). However, Apple did add a MagSafe port so you won’t need to waste a Thunderbolt port on charging. 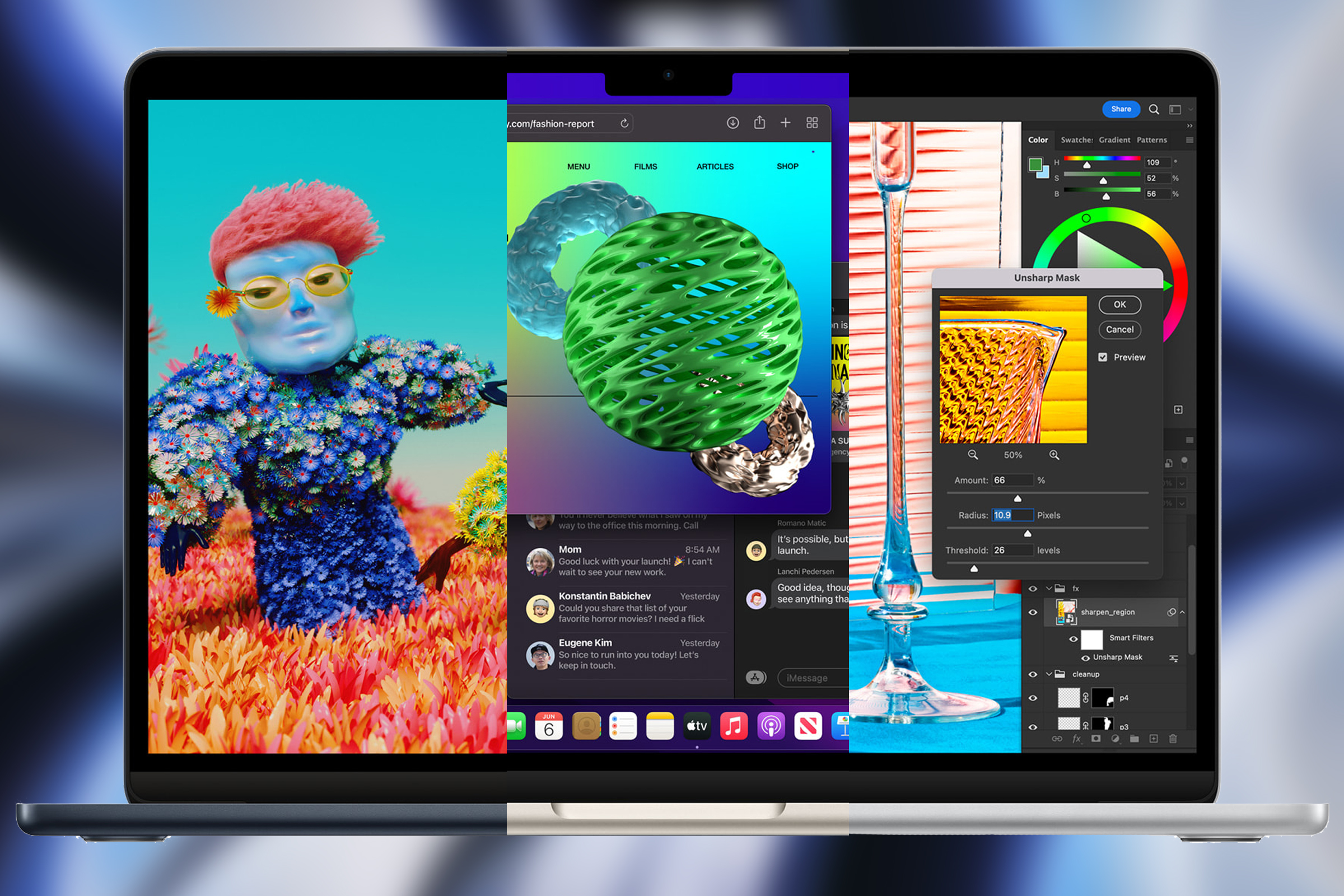