The new iPad (2022) brings a modern design, USB-C and improved cameras, but it also comes with a hefty price increase for an entry-level device. If you’re not too bothered by the whistles and bells, then the iPad (2021) still has plenty to offer and at a price that’s more affordable for casual users.

Apple has updated its entry-level iPad for 2022, but has taken the unusual step of keeping the older model in the current catalogue. There’s a good reason for this, as this time around the two iPads are different in many ways. So, should you go with the cheaper 9th generation device or embrace the modern aesthetic that comes with the 10th generation revamp? We compare the two so you can make the right choice.

For the 10th generation of its most affordable iPad, Apple has given the device a complete makeover. Gone is the Home button and prominent top-and-tail bezels of its predecessor, replaced instead by essentially the iPad mini and iPad Air design.

The display has been increased in size from 10.2-inch to 10.9-inch, made possible by moving the Touch ID sensor to the power button on the top edge and banishing the Home button altogether.

In accordance with the rest of the current iPad crop, the Lightning port has been upgraded to USB-C in the new model, which should allow various peripherals to be attached to the device, such as external storage or even a monitor. This means that the 9th generation iPad is now the only iPad in the line-up to offer both a Home button and a Lightning port. So, if you’re attached to either of those technologies, then your choice is now very clear indeed.

Perhaps the most surprising part of all this is that Apple managed to make all these adjustments and hardly alter the size of the frame. Here’s how the two compare:

While both feature a smart connector, they are only compatible with specific Apple keyboard cases. For the 9th generation iPad there’s the Smart Keyboard, but the newer model has the latest offering from Apple that goes by the name Magic Keyboard Folio. This is a two-part case, one of which magnetically attaches to the rear of the device and features a stand, with the keyboard and trackpad section clipping on via the smart connector. It looks very nice, but comes with a crazy $249/£279 price tag, so you’d probably be better off with a simple Bluetooth keyboard and separate case. These are meant to be the more affordable iPads after all.

You can use the Apple Pencil (1st Gen) on either iPad, although due to the switch from Lightning to USB-C, there’s no way to charge the stylus directly from the port on the newer iPad. So, if you already have a 1st generation Apple Pencil you’ll need to buy a $9/£9 adaptor to make it compatible. Otherwise, all new Apple Pencil (1st Gen) products you buy now will have the adaptor already in the box.

Apple also brings colour to this iPad tier for the first time, with the new model featuring Silver, Pink, Blue and Yellow liveries, rather than the more sedate Black or Silver hues of the 9th generation device.

Basically, if you’ve used a standard iPad over the last couple of years, you’ll be immediately familiar with the 9th generation model, while the new iteration will feel much closer to the iPad Air or iPad mini.

They may look different, but both of these devices are still from the same family and as such share many features. Here’s a more detailed look at how they compare in terms of specifications.

As mentioned above, the updated model comes with a larger 10.9-inch Liquid Retina display than the 10.2-inch Retina panel on the 9th generation model. The addition of Liquid to the name means you also get rounded corners on the 10th generation display, which is nice.

Aside from the switch in resolution from 2,160 x 1,620 to 2,360 x 1,640 that’s afforded by the larger panel, all the other specs are the same for either device. Both have True Tone, SDR brightness (500 nits), sRGB and come with a fingerprint-resistant oleophobic coating. Obviously, you’ll be using swipe gestures to control everything on the 10th generation iPad, while that trusty Home button will always bring you back to the starting page on the more senior device. Sadly the newer iPad still has the unlaminated display that gives this category a cheaper feel in use as it flexes somewhat in use.

Since there is no real difference in screen quality the main choice is between the two design approaches–you have to choose between your perfect size and navigation controls.

The A13 Bionic chip in the 9th generation iPad is the one that originally featured in the iPhone 11 range of devices (including the Pros), so it’s got plenty of performance on tap–albeit from 2019. As you’d expect, the newer model gets a newer selection of silicon, and that takes the form of the A14 Bionic that previously plied its trade in the iPhone 12 line-up (this time from 2020). So, the newer iPad is a bit quicker, but both are more than capable of dealing with most iPad daily duties. Newer, more powerful, chips are reserved for the more expensive iPad categories.

Storage options are the same, no matter which iPad you choose, with either 64GB or 256GB configurations. The former feels miserly in 2022, but Apple continues to stick with it, presumably so you’ll upgrade to the 256GB versions. While we’d recommend doing so, the price increase this involves feels unwelcome in these difficult times, especially with Apple harvesting such huge profits. There’s good reason to choose a 9th gen 256GB iPad over a 10th gen 64GB model.

One of the main areas of difference between these iPads is cameras, both in terms of quality and placement. It’s true that the new and older iPads sport 12Mp front facing cameras, but whereas the 9th generation has its one on the shorter, top bezel, which creates a portrait orientation, the new 10th generation finally sees Apple move it to the longer edge, making it landscape. No longer will you have FaceTime calls where the camera angle feels awkwardly to the side!

In nearly all other areas, the cameras are identical. Both support Apple’s Centre Stage feature that uses software to keep you in the middle of the screen even when you move around while on a FaceTime call. They have an f/2.4 aperture, 2x zoom, video stabilisation, and can shoot up to 1080p at 60fps. The only difference is that the newer version has Smart HDR 3 for photos, rather than the HDR 3 on the older model, presumably due to the A14 Bionic processor.

The rear camera on the 10th generation iPad is markedly superior. It has a higher sensor, faster aperture, and supports 4K/60fps video, while the older one tops out at 1080p/30fps. If video capture is important to you, then the new model is definitely the one to choose.

To see all the main features and technical specifications for both devices, here’s a breakdown of how they compare:

The new design has brought with it a considerable price hike, so these two iPads actually seem like different classes of device. This has been tempered somewhat (although not in the consumers’ favour) by Apple also ramping up the prices on the 9th generation recently as well. (Read more about that here: Is Apple ripping off the rest of the world with inflated prices?) Here’s how they compare:

If you want to save money on a new 9th or 10th generation iPad prices read our Best iPad deals round up. For more advice on buying an iPad read our Which iPad buying guide where we evaluate the whole range.

If you want the latest design and better specs, then the 10th generation iPad obviously has that covered. The new rear camera is better for video, and the front facing one is finally positioned in the spot that makes it ideal for FaceTime. While the A14 Bionic chip is faster than its predecessor, there’s not a hell of a lot in it, so you’ll get great performance out of either device.

In the end, it could simply come down to price. The 9th generation probably still offers the best value (despite the price hike outside the U.S.) We’d be inclined to recommend the 256GB 9th generation iPad (best prices below) over the 64GB 10th generation model, unless you really really like the new design, in which case perhaps you’d like the iPad Air even more. (Read about how the 10th gen iPad compares to the iPad Air). 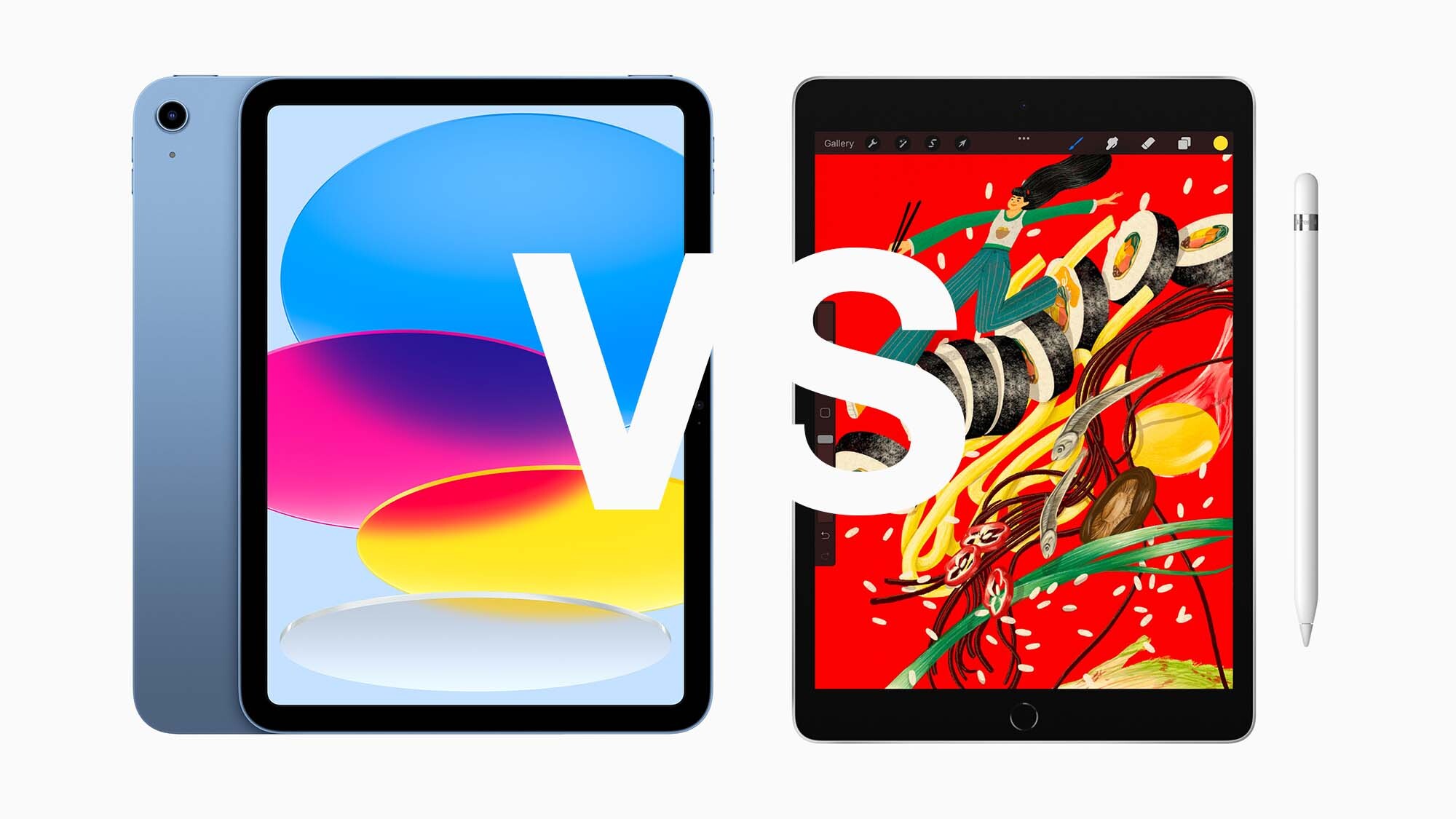