This week in mobile games, a colorful battle royale platform game is top of the charts — but it’s not Fall Guys. Ubisoft showed off The Division Resurgence for the first time and we got the briefest glimpse of Lord of the Rings: Heroes of middle-earth.

Plus, There’s a new Subway Surfers game on Apple Arcade and a banana-collecting platformer starring a big ape that isn’t Donkey Kong.

This week Fall Guys clone Stumble Guys hit the number one spot in the U.S. and U.K. App Store chart. And while it’s a pretty brazen copy of the battle royale, it’s a very impressive one: It really is Fall Guys for mobile in all but name, and even the name’s pretty close.

It has been downloaded over 160 million times to date, according to Appmagic figures. Compare that to Fall Guys on PC and console, which just passed 50m downloads, and you can see just how big the missed opportunity is for Fall Guys maker Mediatonic.

So why isn’t Fall Guys on mobile? Well, making games is hard, and porting a PC and console game over to mobile is still quite tricky, especially if it’s a game with 100 realtime players in it (Stumble Guys is capped at 32 players). Also, there’s politics at play: Epic Games bought Fall Guys maker Mediatonic in March 2021. The Fortnite maker is famously pretty grumpy with Apple taking 30% of all App Store in-app purchase revenue, so don’t expect it to arrive on iOS anytime soon.

Enter Kitka Games and Stumble Guys, which has made more than $21 million since the game launched. As they say in the business world, Stumble Guys is eating Fall Guys’ lunch.

We reported last week that the mobile version of Ubisoft’s The Division was announced in a slightly odd way: with very little detail and not a whiff of actual gameplay footage.

It turns out Ubisoft had a full gameplay trailer all along, and so here we are a week later reporting on it again. So we’ll be quick; it looks exactly how you’d expect The Division to look on mobile.

And in a quite vague interview this week, Ubisoft stressed that it is applying the same AAA game principles to Resurgence as it would to its PC and console output. Good news, I guess? Still no release date, though.

A new ring to rule them all?

A confession, dear reader, I’ve never seen any of the Lord of the Rings films, or read the books. But I’m pretty sure there’s a bit in there about one ring ruling them all, or something.

So it’s with mild confusion that it seems the forthcoming mobile game The Lord of the Rings: Heroes of middle-earth will be all about a mysterious new ring.

It’s all a solid setup for what EA’s Capital Games team is making here, a game along the same lines as Star Wars: Galaxy Of Heroes, in which players battle teams of characters drawn from across the fictional universe’s lore.

And while EA is trying to keep things quiet, you can actually play it right now if you’re willing to do some creative account switching. It’s currently in soft launch in the Philippines App Store.

What else to play next week 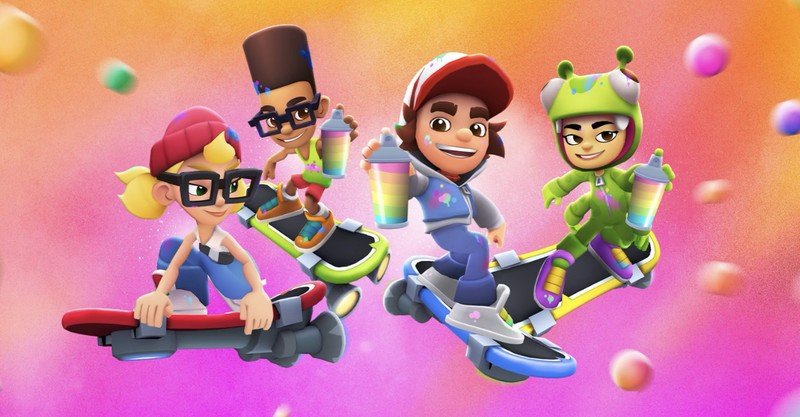 Apple Arcade newbie Subway Surfers Tag is the big game this week, a game that takes the auto-running of the original and opens it out into arenas where you whizz around building combos by grinding rails and shooting enemies. It’s pretty simple stuff; it might not satisfy anyone looking for something meaty to get into this weekend, but for younger players and folks who want some brain-free fun, it’ll do just fine.

It’s not hard to figure out the inspiration for Banana Kong 2. It’s not quite as brazen a copycat as Stumble Guys, but you do play as a running, jumping, primate who bounds through colourful cartoon worlds in pursuit of his favourite fruit: the humble banana.

So yeah, Banana Kong 2 is what Donkey Kong Country would be if it were turned into an auto-running game, but it’s still good stuff – movement is slick, controls are tight and the levels are varied and surprising.