If you’re looking for an all-in-one audio recording package to get your pod/video casting career up and running, the Vocaster Two Studio is an excellent choice.

If you’re hearing the siren call of easy money on YouTube, et al, you need a means of capturing quality audio. The microphone in your laptop or display isn’t going to cut it. Sorry.

While a product like Universal Audio’s excellent Volt 276 studio pack is a great deal for broadcasters, it’s designed with the needs and thought patterns of musicians and engineers in mind–if you have the expertise, you’ll be up and running in no time. The less experienced will have a good amount of learning to do, and that’s where a product like the Vocaster Two Studio comes in. It’s a combination of a high-quality audio interface, microphone, and headphones that feature a design, setup, and software experience tailored to the budding content creator.

The Vocaster Two Studio is tailored to newcomers to the broadcasting routine. The labeling of the controls hints at proper usage (Host/Guest) instead of mere functionality (Mic 1/Mic 2), and everything is arranged according to how a broadcaster looks at things.

The Vocaster Two audio interface is a bus-powered Type-C USB device, but it’s atypical in that there are no quarter-inch line level or guitar inputs. These aren’t particularly pertinent to broadcasting, so why bother? That also means mic inputs are pure XLR, not the combo XLR/quarter-inch that are so common these days. There is a 3.5mm stereo “Phone” (as in cell phone) input that can function as a line-in jack. The front of the device has two quarter-inch stereo headphone jacks on the front, and two balanced (TRS, Tip/Ring/Sleeve) quarter-inch outputs for powered speakers. That much will be familiar to the pure musical crowd.

Taking a cue from the RØDECaster Pro the Vocaster also accepts audio via Bluetooth. This is super convenient if you want to record something onto your podcast from a phone without a headphone jack–one might even say necessary given the increasing rarity of such jacks. There’s a Bluetooth pair/enable button on the back of the interface.

You can see from the images below, that Focusrite is bent on making setup and use as intuitive as possible. The Guest/Host labelling reminds me of the old radio broadcast facilities I once habituated. Input from phone, output to camera–brilliant.

I quite liked that the top of the Vocaster that slopes towards you, as well as the big honkin’ infinite-travel rotary dial you use for changing the mic input levels. Surrounding the big dial is a circular “halo” meter showing the master gain, with two semi-circular strips just outside the halo displaying the input levels for the microphones.

All the dials have exceptionally smooth and solid-feeling travel, however, I’m not sure I like the host headphones and speaker output assigned to the same dial. I might’ve opted for a third button assigning speaker volume to the larger control, or simply a fourth knob. That might’ve unbalanced the look of the interface, but c’est la vie. Then again, I have tasks other than broadcasting in mind.

Below the rotary dials are six buttons, two for muting the two microphone inputs, two that toggle the main rotary dial between the host and guest mic inputs, and two that “Enhance” the sound of each mic input–more on Enhance in a bit.

The whole top is done in flat black, which looks fantastic but shows fingerprints quite readily. The bottom has that speckled dark gray look which usually signifies recycled plastics. (It really does in this case.) I don’t love the look, but I certainly appreciate the thought.

The Vocaster Two is what’s known in the industry as a 14-in, 4-out interface. That first number reflects the total number of monophonic inputs (a stereo input counts as two mono.) that the interface presents to the recording software. The list includes both physical (the two mics, L/R Bluetooth, and L/R Phone) inputs and virtual (4 loopback inputs, two L/R) inputs for the audio generated by programs on your computer (streaming, media players, etc.).

Another four virtual inputs are actually L/R submixes: Video is the entire mix (all unmuted inputs) sans the guest input, and Show is the entire mix (all inputs) as seen in the Vocaster Hub software. Both save you from having to create multi-track mixes in your DAW (recording software). The chart from the users guide listing the inputs is shown below.

Speaking of input, the Vocaster will automatically adjust the gain levels of the mic inputs for you. If you’re new to recording, this is a nice bit of handholding. And once you see what the proper level (approximate) looks like, you’ll have no problems setting or tweaking levels manually.

As the owner of a Focusrite Clarett 4Pre (Thunderbolt), I did run into one issue most users won’t–incompatibility between the Vocaster Hub software that is used to change settings (some of which aren’t accessible from the physical interface) and my older Focusrite Control app. Updating the latter fixed the issue of Vocaster Hub not recognizing the interface. Other software saw the interface just fine.

The included Hub software lets you to do everything you can from the physical interface, plus change the Enhance settings for each channel (clean, warm, bright, radio) and toggle the 48 volt phantom power separately for each channel.

The Hub software is also where you initiate the auto gain function. Click on it, speak into the microphone for about 10 seconds, and it will adjust the gain for optimal signal strength, i.e. loud but without distortion. It might be nice to have a memory function for different mics, but that’s a musician talking.

Also indicative of the Vocaster Two Studio’s focus on broadcasting is the software bundle:

The Vocaster Two Studio is backed by an unusually long, three-year warranty, as well as year-round, 24-hour support.

As the Vocaster Two Studio is a bundle, the quality of the mic and headphones is almost as important as the quality of the interface. If they’re not up to snuff, you’ve fiddled away money and the world has more tech waste on its hands. While I loved the analog-vibe of Universal Audio’s Volt 276 Interface, I felt it could’ve done better both mic- and headphone-wise.

The Vocaster Two audio interface doesn’t have the gaudy specs (gain, noise, distortion) that many modern interfaces claim. Especially when compared to my Focusrite Clarett 4Pre and Universal Audio Apollo Twin X–appreciably pricier interfaces. However, in use, it sounded clear, musical, and pretty much as sonorous as those others on my desk. If I had to ascribe any deficit, it might be in the clarity of the sound field which is a mid-range thing. It would be very, very close however.

What is very noticeable is the ton of headroom on the mic inputs–far more than the aforementioned competitors. I’ll talk more about that in a bit. Also, the Enhance function is very noticeable sonically. I personally preferred the Clean (no compression or EQ) setting, but the compression and EQ were employed effectively on the Warm, Bright, and Radio settings. Which you’ll prefer is a matter of taste, what you’re recording, the other elements in the mix, and the result you’re looking for. Overall, I’d say Focusrite has nicely covered most scenarios and desires.

The auto-gain function worked well, albeit a bit conservatively (less gain) compared to what I’d dial-in. But there was plenty enough signal for recording. Keep in mind that you’ll want to use this feature with the mic positioned as it will be when you actually record with it.

The mic preamps were also practically noise-free. (Focusrite is very good with that.) The Bluetooth connected quickly and input was as clear as the technology can produce.

All in all, while I wouldn’t call the Vocaster interface a top-tier unit, its real-life performance matched anything priced similarly that I’ve tested. In truth, I was in no desperate rush to get back to my other interfaces, as I’ve been when testing some lesser interfaces. I also love the look.

What was even more impressive were the sonic characteristics of the included DM14v broadcast mic. I liked that it has an integrated pop and sibilance filter (foam over the speaking end) as well as the integrated mic stand mount. There’s even a male-to-male adapter/coupler so you don’t have to mess with your existing mount to attach the DM14v.

I’d be in no hurry to upgrade this mic as it’s dead-on in the frequency range of the human voice. The DM14v compared nicely to my RODE NT-2A and Shure SM57/58’s, though the RODE, being condenser rather than dynamic, has a different mid-range flavor.

But darn if it isn’t a good thing that the Vocaster interface’s inputs have 70 dB of headroom. Plugging the DM14v into my other interfaces, I had to crank the input dials almost to their limit to get an adequate signal. Even my 57’s and 58’s don’t require as much gain.

The DM14v attached to the Vocaster Two? No problem. Plenty of signal. That means if you want to use another extremely low-signal level dynamic microphone such as the Shure SM7B with the Vocaster Two, you won’t need a Cloudlifter or similar mic preamp.

I didn’t get to test the smaller SM58-like mic featured with the Vocaster One, but I did hear it in a Zoom meeting with the Vocaster product manager. It sounded fine. I don’t know what Enhance setting he was using, though I noticed some compression. Beyond that, I can’t really say.

Though I haven’t talked about its inclusion, the microphone cable Focusrite provides is of reasonable quality–supple with good quality connectors. It also fits snugly enough that I wouldn’t worry about it coming loose without a rather substantial tug.

The HP60v headphones Focusrite bundles are slightly better than those supplied with the Volt package, but I’d still rate them the weakest component in the kit. The mid-range is a bit more saturated than optimal for musical listening as it makes it more difficult to pick out individual instruments and is tiring over the long haul. However, heavy mid-range can also be good for monitoring the speech that’s part and parcel of this product’s mission.

I’m also not in love with the six-foot, non-coiled cable–I found it hard to keep out of the way. Give me coiled types any day. Coiled is probably also more difficult to manufacture with recycled or green materials. That’s pure guess, but it does segue into Focusrite calling out that the Vocaster Two use lots of recycled materials. I appreciate that.

I should point out that I’m using some pricey and very competent Sony, Marshall, and Edifier planar headphones as the sonic baseline for comparison. The HP60v’s are perfectly serviceable, if not best of breed. In other words, they’ll do fine.

I am a sucker for in-tune, on-target products. Instead of simply bundling one of their existing, highly regarded interfaces, Focusrite created something far more suitable to task. The company took design cues from existing products, but expanded on the concept to make the Vocaster unique. Kudos.

In short, it’s an excellent starter kit for a decent price that you won’t immediately outgrow. Now the company needs to sell a kit with two mics and two pairs of headphones. I saw neither the DM14v or HP60v for sale separately. Hopefully, they will be by the time you read this. 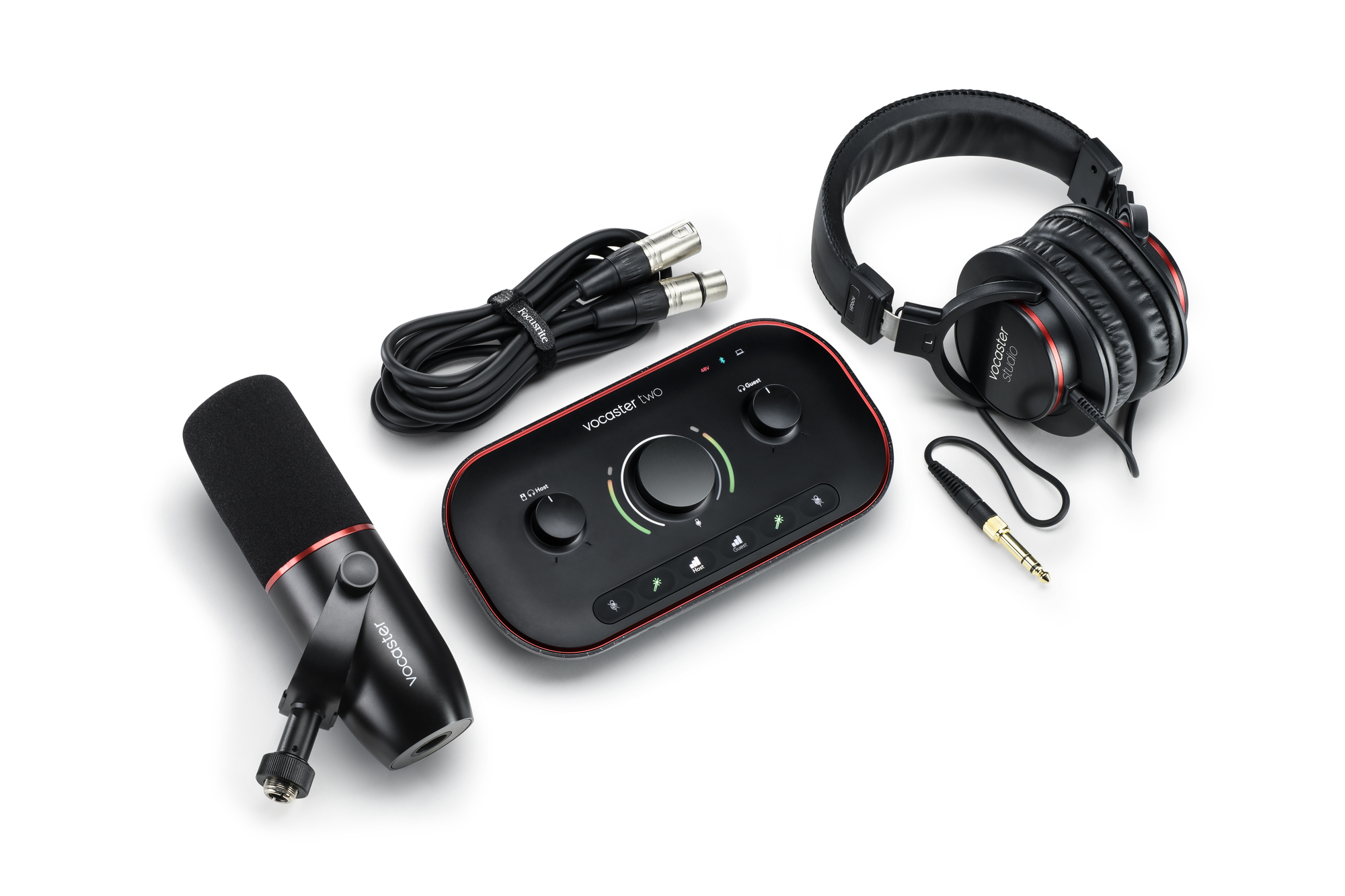