Apple holds a Back to School promotion (now known as the Higher Education Offer to avoid confusion) every year and it gives a free product – usually AirPods – away with purchases of qualifying Apple products.

However, this year it seems that Apple might not give away AirPods. Instead, Apple may give away a gift card. Apple is said to be planning to kick this year’s deal off on Friday, June 24 in the US.

This education-focused deal is in addition to the year-long discounts Apple offers to students and education institutions on its Macs and iPads. We explain everything you need to know about getting a discount and using Apple’s Education Store in this guide to shopping in the Apple Education Store.

Apple’s Back To Higher Education deal has already run in Australia and other locations in the southern hemisphere this year (from January 6 to March 14 2022), but the education event will be kicking off in the U.S. in mid-June, and then in the U.K. and Europe from July. So if you are based in that part of the world get ready to take advantage!

Since it’s already run in the southern hemisphere we assumed that Apple will be giving away a pair of AirPods when the Higher Education deal kicks off in the north this summer. However, Bloomberg’s Mark Gurman has suggested that Apple will instead offer vouchers.

If Apple does offer vouchers it is likely to be a similar deal to the Black Friday Apple deal which sees different voucher values associated with different Apple products. Vouchers also mean that those taking advantage of the deal get more choice about what they spend them on.

Normally the deal is free AirPods though, and that may still be the case in 2022. Normally students who buy a qualifying product will get a free pair of 2nd gen AirPods, or they will be able to pay a little more to upgrade to the newer AirPods or AirPods Pro. The free AirPods are in addition to the education discount Apple offers students in higher education all year round.

In the past it has been necessary to buy one of the following eligible products to get the free AirPods:

All products sold to students via Apple’s Education Store include a discount, so you will already be making a saving on any of these products.

In addition, students can get 20% off AppleCare+.

How to get Apple’s Back To School deal

As long as you based in an area where Apple is running the deal at the time of your purchase, and are a student in higher education, or about to start higher education, you can qualify for Apple’s Higher Education deal and get a free pair of AirPods (or vouchers if that’s what the deal is). There are more details about who the deal applies to below.

Note that if you qualify you are able to get discounts all year round by shopping in the Apple Education Store, so you don’t need to shop now to get a bargain.

Due to differences in when the school year starts around the globe Apple runs the promotion at different times in different places.

Apple runs the promotion in the southern hemisphere in the first few months of the year. Hence, if you live in Australia, New Zealand, South Korea, and South America you can take advantage of Apple’s deal between 6 January to 14 March 2022.

The same deal will run later in the year in the UK, US, Canada and Europe. Usually between June and September in North America, and between July and October in Europe and the UK.

In the US you’ll be able to visit Apple’s US Education Store, but logging on from your university network may make the process easier.

In the UK you will need to verify your student or staff status with UNiDAYS, which is also how you would access its Back to School offers.

Go to the Apple Education Store for other regions using the links below:

When you make your purchase you will be able to request the AirPods that you want at checkout and pay the extra if you wish to upgrade to the wireless AirPods or the AirPods Pro.

Apple’s Higher Education Offer usually runs from June to September in the US and Canada, and from July to October in the UK.

In Australia, New Zealand and South America the sale takes place between January and March.

In 2020 Apple launched the US sale on 15 June with an end date set for 29 September, although Apple ended up extending the end date to 12 October instead, moving it to just a day before Amazon’s Prime Day, which took place over 13-14 October 2020. Unfortunately Apple didn’t extend the deadline in North America in 2021 so it is unlikely to in 2022.

If this year’s deal isn’t running when you are considering buying from Apple that’s no reason for disappointment: Apple’s education discounts are available all year round.

In 2021 Apple’s Higher Education Offer (aka Back to School Sale) started on 15 July 2021 in the UK Education Store. The sale ran until Monday 11 October.

If this year’s deal isn’t running when you are considering making a purchase from Apple that’s no reason for disappointment: Apple’s education discounts are available all year round. Students and educators need to log in via UNiDAYS website to see the offers. Educational Store discounts are usually up to £280 for UK students.

The dates in the southern hemisphere correspond with the new school year there.

Apple’s Back to School Sale for Australia, New Zealand, Brazil and, South Korea started 6 January 2022 and ended on 14 March 2022.

Who can get Apple’s Back to School deal

If you are registered at a higher education facility (that’s post-K12 education, universities and colleges) you will qualify for the free AirPods deal as well as Apple usual education discount. Employees of these institutions can also qualify. If you are a parent buying for your student offspring then you can also qualify.

Alternatively, if you are an employee of a public or private K-12 institution/school in the US or Canada you are also eligible. Apple’s Education pricing isn’t available to parents with kids at school, but a homeschool teacher can qualify.

Even when Apple isn’t running the Back to School Deal students and education institutions can still take advantage of its standard educational pricing on its Educational Pricing page (
US here/
UK here).

Thanks to the deal university students, or those just about to start university or higher education, will receive a free pair of 2nd gen AirPods with a new Mac or iPad.

Alternatively you can spend a little more to upgrade your AirPods to the 3rd gen AirPods or the AirPods Pro. The AirPods Max isn’t included in the offer (
see where to buy the Max at the best price).

All the details and terms and conditions can be found on Apple’s site here.

Which iPads are included in Apple’s Back to School deal?

Not every Apple product you can buy in the Education Store is included in the free AirPods deal.

For 2022, at least in the southern hemisphere, Apple included the following iPads:

This corresponds with the 2021 deal, where Apple included the iPad Pro and iPad Air in the Back To School offer. The iPad 8th generation and iPad mini 5th generation are still excluded from the offer (perhaps because they are still relatively new).

You can still get discounted Educational Pricing on the iPad and iPad mini if you qualify, you just won’t be able to get the free pair of AirPods.

If you don’t qualify for the education pricing we have a separate guide on where to get the best deals on the iPad. For advice about which iPad to buy read which iPad is best for students.

Which Macs are included in Apple’s Back to School deal?

If you qualify for Apple’s Back to School AirPods you need to buy one of the following Macs.

You’ll also be able to take advantage of education pricing for all of those Macs.

If you don’t qualify for an education discount have a look at these round ups of the best deals on a new Mac:

We also have this advice about which Mac is best for students. 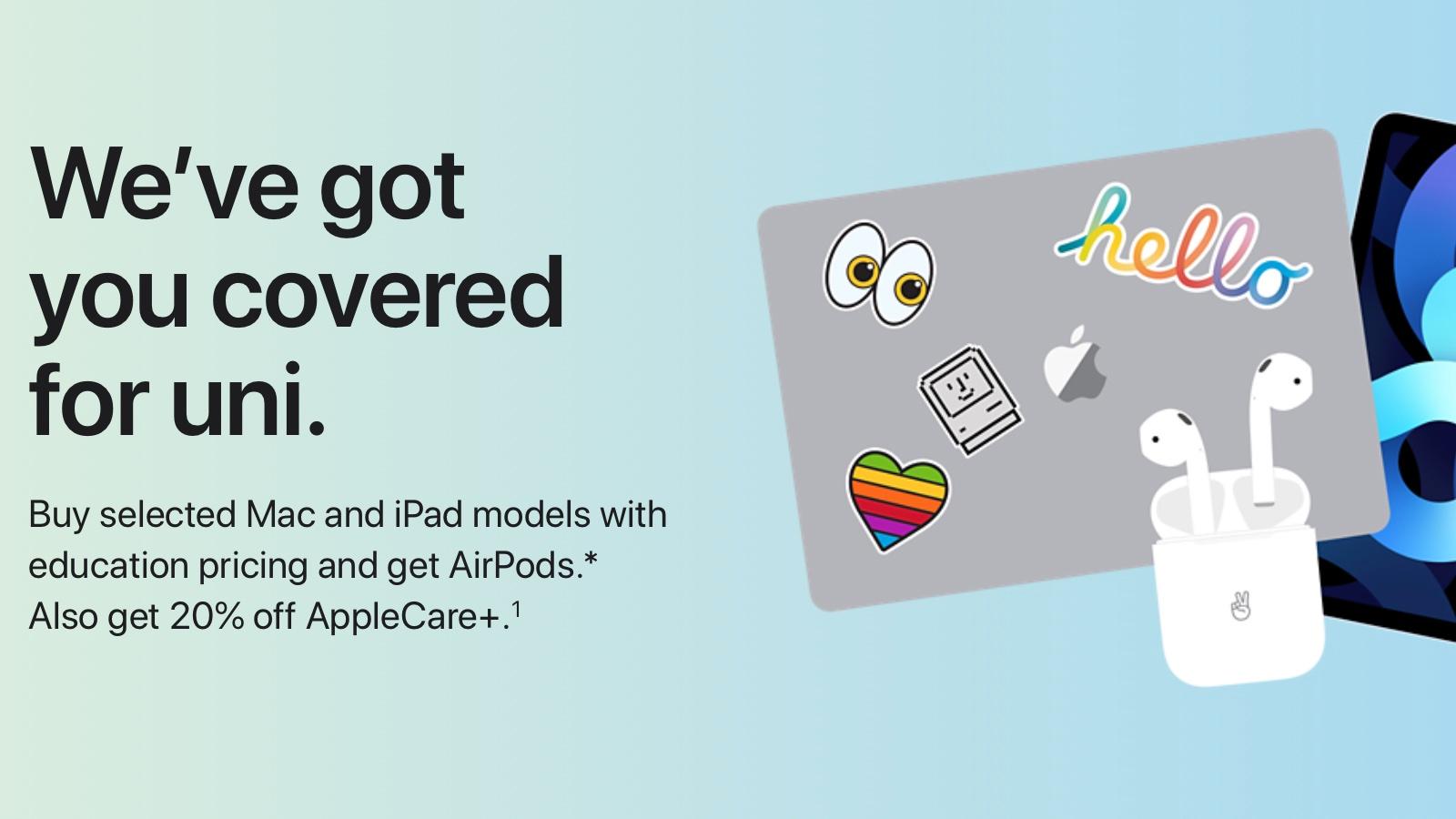