When Apple started to sell the HomePod mini in November 2020 the standard HomePod’s days were numbered, and inevitably the larger device was discontinued in March 2021. However, there may yet be a new HomePod in the future – one equipped with a screen and combining features from other Apple devices.

In fact there are rumors that three new HomePods could be on the horizon.

Read on to find out what’s in store for the HomePod and how Apple is improving its speaker, with rumors indicating that the next model may be larger, feature a screen and offer the ability to host conference calls.

Analyst Ming-Chi Kuo tweeted in May 2022 that Apple’s working on a new HomePod for later this year or early in 2023.

Kuo isn’t the only one expecting a new HomePod. A June 2022 Power On newsletter from Apple rumor monger Mark Gurman suggests that we won’t see a new HomePod in 2022, but Gurman does indicate that it could be one product of of a “deluge coming between the fall of 2022 and first half of 2023.”

So it’s feasible that we could see a new HomePod in the spring of 2023.

Will this be the rumored HomePod with a screen?

Will Apple make a HomePod with a screen?

We feel that the absence of a screen – and over-reliance on Siri – has been one of the biggest failings of the HomePod. We feel that a screen would help users interact with the device as well as open it up as a platform for watching other content, such as YouTube videos and news reports.

A Bloomberg report from Gurman back in April 2021 discussed Apple’s plans for two future Apple products which do seem to indicate that Apple was at least considering making a HomePod with a screen. These rumored products included:

And in April 2022 Gurman referred to these plans again, stating that Apple is “absolutely” still working on a new HomePod, which Gurman says will combine a HomePod, Apple TV, and FaceTime camera into a single “combination product will probably be at the center of Apple’s approach.”

If Apple does launch a HomePod with a screen it will help the HomePod compete with devices from Google and Amazon which have combined a speaker with a screen for some time, such as the Amazon Echo Show (you can buy the Echo Show 15 on Amazon US for $239.99 or Amazon UK for £239.99.)

There are plans then, it seems, for Apple to give the HomePod a screen, perhaps by combining it with an iPad or an Apple TV. The April 2021 Bloomberg report indicated that these two projects focused on combining the HomePod with other Apple products are underway at Apple, but at that time they were only in the concept stage – it’s unknown if Apple is any closer to making them a reality.

For more ideas about how Apple might reinvent the HomePod read: How the HomePod can be Apple’s new iPod: Fun, popular, and simple. Plus, Could Apple’s rumored HomePod actually be a tiny Studio Display?

According to Gurman’s June newsletter, the new HomePod will be more like the original HomePod – so expect something larger and with better audio performance than the HomePod mini.

While it’s not known if this new HomePod will incorporate a screen, as per the rumor above, this new HomePod could have an updated display on top, according to Gurman. The screen may also have multi-touch functionality.

As for the HomePod with a screen, the April 2021 Bloomberg talked about a HomePod with a screen mounted on a robotic arm so that the camera could follow you around the room. To get an idea of how this could look we need only look to the Amazon Echo Show 10, which combines a display that moves automatically with Amazon’s speaker. The Echo Show 10 costs £239.99/$249.99. Buy one here (UK) and here (US).

Swiss website Handy Abovergleich and designer Eric Huismann have created a series of concept illustrations of how this new generation of HomePod could look. They have come up with concept designs for two separate devices: the HomePod TV (a mixture of the HomePod and the Apple TV) and the HomePod Show (a HomePod with a touchscreen display).

Here’s how they image the HomePod Show – a speaker with a camera and a touchscreen – could look.

According to Gurman, the new HomePod, is code-named B620. Here’s what we can expect in terms of specs and features:

Gurman indicates that the new HomePod will feature the same S8 chip that will arrive with the new Apple Watch 8, Apple Watch Pro and Apple Watch SE.

The new HomePod could feature a camera, as is rumoured in the Bloomberg piece. With a camera incorporated into the HomePod it would be possible to participate in a video conference on the TV screen.

A camera could also be used to recognise gestures. Some years ago a patent was filed that related to a future HomePod that could interpret 3D hand gestures. See more on Patently Apple.

The patent describes a HomePod that can “interpret three-dimensional hand gestures as a means of controlling the device so as to execute an action or function.”

Perhaps not the display we are hoping for, but a more interactive display than the one we have currently. We’d like to see more than just volume controls.

Combining the HomePod and Apple TV does look like something that is being investigated by Apple. The Bloomberg report above mentions it, but that wasn’t the first indication that something like this was planned.

In April 2020 it emerged that Apple had switched the software on the HomePod from iOS to tvOS, according to a 9to5Mac report. Such a move makes it even easier to merge those products in the future.

What’s less obvious is what Apple would achieve by combining the HomePod and Apple TV, those looking for audio improvements can already use the HomePod as the audio output of their Apple TV.

Swiss website Handy Abovergleich did come up with an illustration of how this might look. They call this one the HomePod TV – the bar under the TV becomes not only the hub for TV, internet and smart devices, but also a sound system with support for standards such as Dolby Atmos and Apple Lossless. 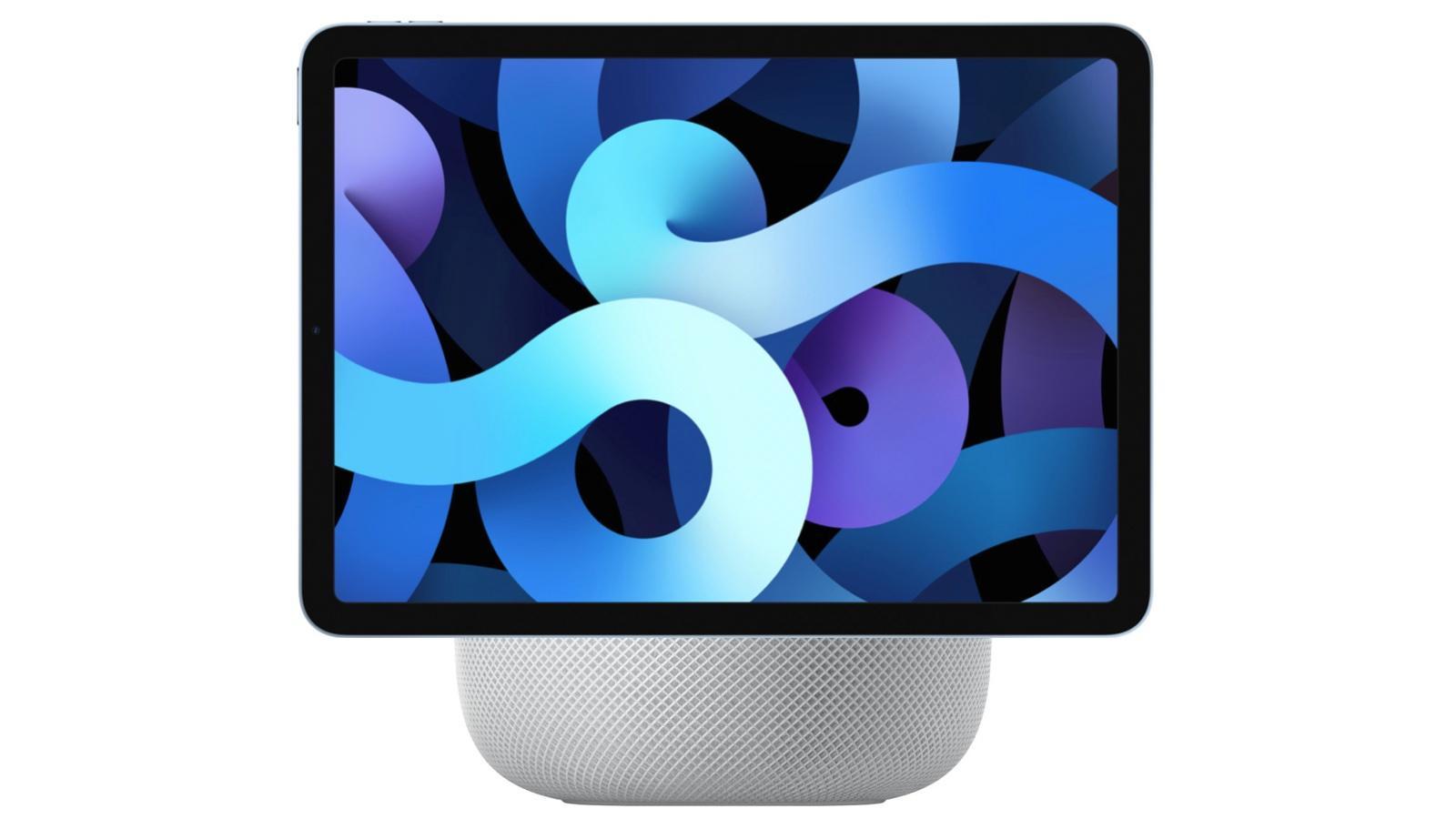