The original AirPods Pro were introduced in October 2019, two and a half years ago. How long will we have to wait for Apple to update the AirPods Pro and unveil its second generation of premium wireless earbuds?

The AirPods are extremely popular products, so it seems bizarre that Apple leaves it so long between updates. The standard AirPods also went two and a half years between their second edition in March 2019 and the third in October 2021 (you may be interested to read our 2021 AirPods review). Could Apple make fans wait even longer for the new AirPods Pro?

In this article, we take a look at how Apple will evolve the AirPods Pro line-up in 2022, and examine the release date, price, tech specs, design changes and new features of the upcoming models which may features a new design, longer battery life, fitness tracking and support for lossless streaming of Apple Music.

Apple introduced a new version of its standard AirPods back in 2021, but the AirPods Pro remained untouched. Will we see new AirPods Pro in 2022? It certainly looks like it, and with the three year anniversary of the AirPods Pro fast approaching, it’s about time. As Bloomberg’s Apple expert Mark Gurman said in a May newsletter: “The batteries are already probably in trouble for some early adopters,” so Apple will likely release a new model this fall, roughly two and a half years after the original model. That’s about the same time frame between AirPods releases.

We expect the next version of the AirPods Pro to launch in the fall of 2022: likely September or October. If Apple waits until October it will have been three years since the original AirPods Pro launched.

The new models have been expected for some time, back in 2021 there were rumours that Apple was working on new AirPods Pro, but due to component shortages and COVID-related delays only the AirPods 3 launched. But Apple is now ramping up to launch new AirPods Pro.

In May 2022, Apple analyst Ming Chi-Kuo tweeted the following:

And according to a May PowerOn newsletter, Mark Gurman indicated that the AirPods Pro will finally be arriving “in the fall.”

Price-wise, we expect the new AirPods Pro to cost $249, which is the same as the current model (although the AirPods Pro are frequently on sale for less than $200). The new Beats Fit Pro retail for $200, so it’s likely Apple will keep the AirPods Pro at $249 to separate the two models.

However, we could see a price rise: in a report for iDropNews, LeaksApplePro indicated that the new AirPods Pro will get a fairly significant price hike to $299.

For comparison, here’s the pricing for the current range of AirPods on the Apple Store:

Note that the current AirPods Pro model is likely to be discontinued when the new one comes out, rather than sticking around with a price cut.

With the AirPods receiving a redesign in 2021, we assume that the AirPods Pro will change in order for the differences between the two types of AirPods to be clear.

However, 52audio in June 2022 wrote that the design won’t be that different from the 2019 after all. In fact it will take cues from the AirPods 3.

According to 52audio, the biggest upgrade to the AirPods Pro could be the charging case, which will gain a USB-C support for fast charging and a small speaker for better Find My support. This backs up a January 2022 Ming-Chi Kuo claim that the second-gen AirPods Pro could come with a case that can emit a sound to help locate it when lost. There will apparently be a hearing aid mic connection too.

Changes to the charging case would be good news: we do have a few reservations about the current charging case: it’s harder to get the Pros out than other AirPods models, and the hinge feels less robust. (The hinge sits along the longer edge because the Pro models are shorter and wider than before.) Perhaps Apple could tweak the case design in lieu of major changes to the earbuds themselves.

It’s also been claimed that the new AirPods Pro will come in two sizes for the first time. This prediction is based on leaked components, and was made via a tweet by Mr White back in 2020:

He referred to the image as W-chips, but it’s actually the H-chips that feature in the AirPods so we assume that’s a mistake. The components that feature in the leaked images come in two different sizes, suggesting that Apple may have two sizes of next-gen AirPods Pro in the works. (It appears that Mr White has since deleted the tweet, though it’s unclear whether that means it was wrong or just ruffled the wrong feathers.)

Another top request for the new AirPods Pro is a choice of more sizes of ear tips so users can ensure they get the perfect fit. Currently Apple only offers three sizes: small, medium or large, so hopefully there will be more on offer with the next generation. Buy AirPods Pro Ear Tips here.

It’s feasible that we could see a new color option when the next set of AirPods Pro is launched. It would be unusual for Apple to get this far into a product line without offering at least two colors. The AirPod Max, indeed, get five: Space Gray, Silver, Pink, Green, and Sky Blue.

Space Gray (or another variant on black or dark gray) is probably the most likely – indeed there have been rumors that a black pair of AirPods were being considered and there are certainly people who would love black AirPods.

When convincing customers to spend more on the premium AirPods, features are the key. What’s Apple got up its sleeve?

The AirPods Pro could be in line for gesture-based controls. Apple applied for a patent in 2020 called Wearable Voice-Induced Vibration or Silent Gesture Sensor, which describes the use of a sensor to scan the user’s face and detect minute changes in expression, and the muscular movements associated with speech even if not spoken out loud. This could be used to trigger commands, or as a biometric identification tool for improved security.

The limitations of Bluetooth are the main reason why the 2019 AirPods Pro cannot support Lossless Audio (which we will discuss in more detail in the section below). It appears that Apple will rectify this by enhancing Bluetooth in the new models.

Discussing Apple’s new technologies in a February 2022 interview, acoustics VP Gary Geaves said: “There’s a catch, as far as I can see it–a bottleneck that’s been preventing real qualitative leaps in the sound of wireless headphones essentially since wireless headphones came into being. I’m talking about Bluetooth, of course, which almost all wireless headphones, including AirPods, rely upon and which doesn’t have the data rate for hi-res or even lossless audio.”

How can Apple get this extra bandwidth? The obvious choice would be for the company to upgrade from Bluetooth 5.0 (used in the AirPods 3 and current AirPods Pro) to 6GHz Bluetooth.

The next AirPods Pro are rumored to get longer battery life and faster charging due to the new USB-C equipped case.

A June 2022 report from 52audio claims the new AirPods Pro will feature an upgraded version of the H1 chip supporting “self-adaptive active noise cancellation”, along with improved Find My, heart-rate measurement, a heavily modified USB-C charging case, and hearing aid functionality. We’ll discuss that exciting collection of new features below, but the H2 chip should brings a number of benefits to Bluetooth streaming.

All AirPods (AirPods 2, AirPods 3, Pro and Max) feature the H1 chip, so this new upgraded version may well be called the H2.

Three years on from the introduction of the AirPods Pro, what new audio features can Apple add to its flagship earbuds?

Apple launched Lossless Audio and Lossless High-Res Audio for Apple Music in June 2021, but due to the limitations of Bluetooth and the AAC codec, none of the current AirPods are able to stream the higher-quality tracks. However, Apple rumor monger Jon Prosser reported that Apple is working on a new audio codec that would allow lossless streaming over AirPods, which could get an introduction alongside the new models.

In January 2022, Kuo offered a corroborating report (via 9to5Mac) that the second-gen AirPods Pro will bring “support for Apple Lossless (ALAC) format.”

If the AirPods Pro support Lossless, Apple may also need to enhance the Bluetooth capabilities (see above).

LeaksApplePro has suggested that alongside Lossless Audio we can expect “state-of-the-art” noise-canceling.

The current AirPods Pro already offer noise-canceling, but that report indicates that the technology will be much improved.

Some tempting new health and fitness features have been rumored for the AirPods Pro, as we will discuss below. However, a report from Bloomberg’s Mark Gurman in July 2022 suggests that these new features may not make their way in to the AirPods Pro until the next generation.

According to Bloomberg (in 2021), the next AirPods Pro will focus more on fitness tracking and have updated motion sensors. They may even offer tracking assistance of sorts when you’re not wearing them.

This heart-rate feature will apparently “collect and analyze the wearer’s inner ear data”.

The AirPods Pro may also feature a sensor that can measure body temperature, although this is another feature that may not make it into the 2022 models. A similar temperature sensor is rumored for the Apple Watch Series 8.

Gurman believes that the heart rate and temperature sensors won’t make it into the AirPods Pro 2, but “could arrive one day.”

Speaking of health and fitness, improved water resistance would be beneficial. The IPX4 rating currently offered leaves a fair bit of room for improvement. The RHA TrueConnect and Creative Outlier Air headphones, which are the top two choices in our roundup of the best wireless earbuds, are both rated IPX5; the JBL UA True Wireless Flash buds are rated as a ‘stormproof’ IPX7. We hope to see improvements here.

If you don’t want to wait for the new AirPods Pro, read our round up the best wireless headphones for iPhone. 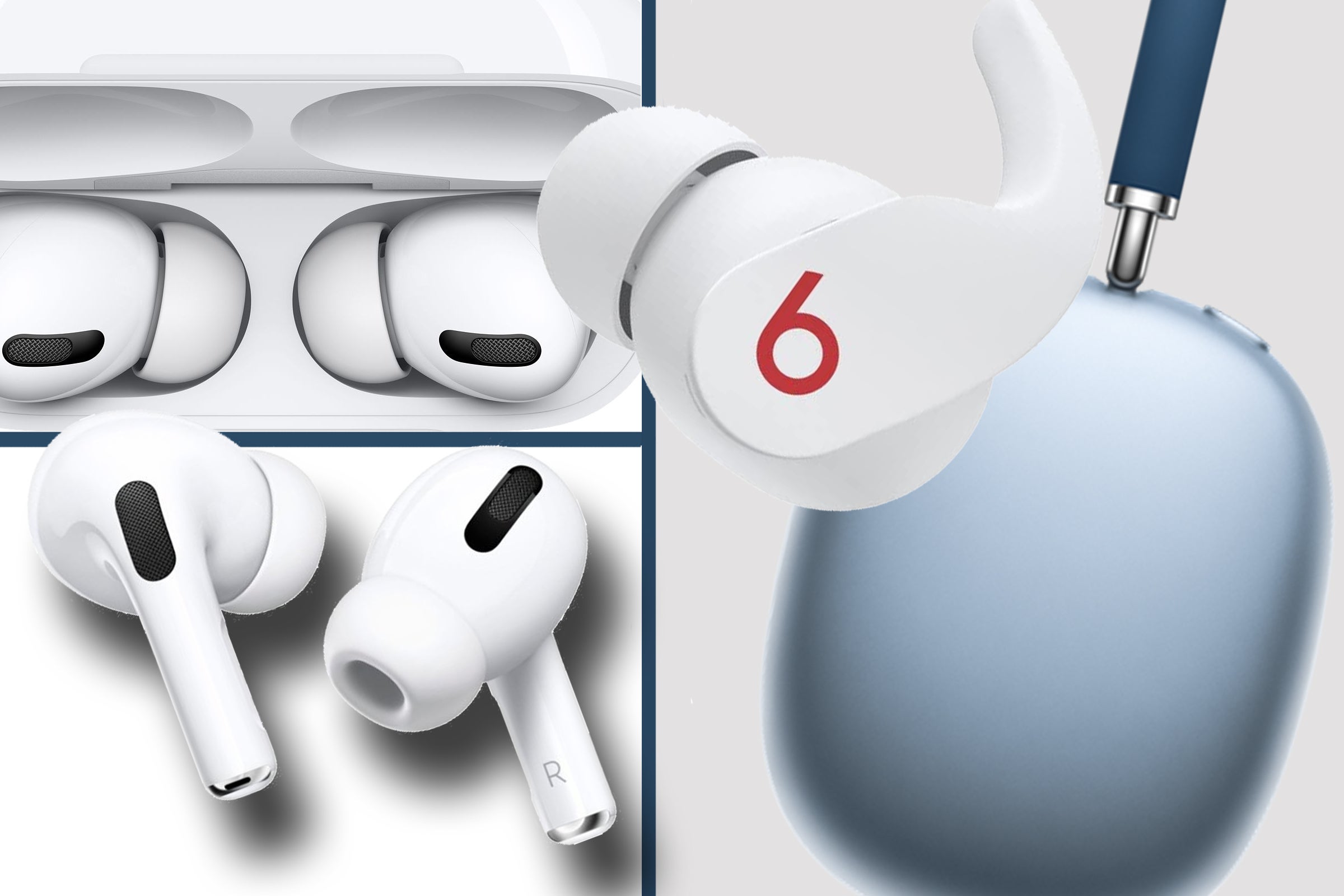